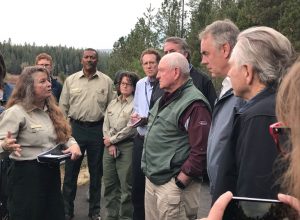 Paradise, CA — During a visit to the devastation in Paradise, US Agriculture Secretary Sonny Perdue argued there is an “awakening” that forest policies of the past should be revamped moving forward.

Perdue, who oversees agencies such as the US Forest Service, toured the destruction left behind by the Camp Fire, along with Secretary of the Interior Ryan Zinke. During a media briefing, Perdue stated, “There is an awakening, I think, and some of the people (conservation organizations) that have litigated against good forest management techniques are now seeing that the pristine forests that they were imagining are no longer pristine when they are burned. Well-groomed and well managed forests can protect and prohibit against the type of devastation that we see here.”

Giving more specifics, he stated, “It is coming in and clearing the forests. Now logging has become a pejorative term of just massive hillsides of clear-cutting. That’s not what we’re talking about and what reducing fuel loads is all about. We’re talking about common sense types of provisions like prescribed burns at the right times, and coming in and reducing all of this fuel load and chaparral on the ground so you don’t have these fires that just rage.”

Zinke added, “In my mind, there is no doubt that the temperatures are getting hotter and seasons are getting longer. In drought conditions, the moisture content is also much lower. Taking that as a backdrop, it doesn’t relieve you from the responsibility of trying to mitigate the fires.”

Zinke says it needs to include going in and reducing the fuel loads and removing diseased stricken trees earlier in the process.