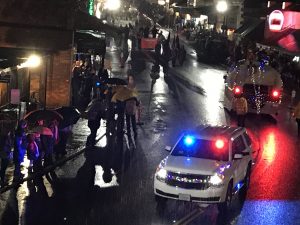 Sonora, CA — Despite some rain, there was plenty of cheer at Friday night’s Christmas Parade in downtown Sonora.

There were over 60 entries in the parade, however, several were last minute scratches due to the rainfall that lasted throughout the afternoon and into the evening. A majority still took part, though. Hot chocolate seemed to be an extra popular accessory this year.  There was the traditional mix of marching bands, horses, lighted emergency response vehicles, Veterans groups, churches, classic cars, children dancing in the street and Mr. and Mrs. Claus.

New this year, the parade had a Grand Marshal. Recently retired Police Sgt. Glenn Roberts was picked to lead the parade down Washington Street. He was recognized for his continued commitment over the years to help make the parade as successful as it is.

The parade always kicks off the Christmas season in Sonora and draws visitors to the downtown area.