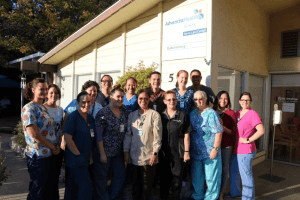 According to Adventist Health Sonora, Sierra Care Center’s long term care units 6 and 7 have been recognized among the “Best Nursing Homes,” as rated by U.S. News and World Report. The media outlet evaluates more than 15,000 homes. For 2018-19, just 2,975 nursing homes earned the honor.

“This designation is a validation of the work that we do,” comments Rusty Ingraham, Skilled Nursing Director at Adventist Health Sonora. Ingraham says the results are due to many ancillary departments whose dedicated teamwork contributed to the ranking outcome.

“I am so proud of the care our associates at the Sierra Care Center provide – their love and compassion for each resident is evident in these outstanding results,” states Michelle Fuentes, President of Adventist Health Sonora.

Since 2009, when U.S. News began providing nursing home ratings, it has relied on data from Nursing Home Compare, a program run by the federal agency Centers for Medicare & Medicaid Services (CMS), which sets and enforces standards for nursing homes.

However, due to the agency’s recent move from a self-reported to payroll-based nurse staffing reporting and a freeze in health inspection data since last November, U.S. News modified how it uses the data for evaluating a nursing home’s overall performance and used data available from April 2018 forward for this report. For this year, the media outlet describes that its overall rating methods gave more emphasis to staffing quality and applied more of its own assessment indicators not used by CMS in its own ratings.