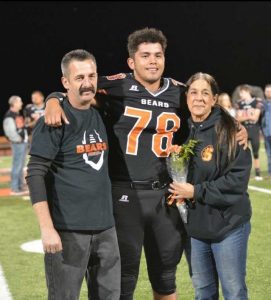 As reported earlier here, the wreck happened during the evening commute around 6 p.m. along Tuolumne Road at the Lambert Lakes intersection, near the Junction Shopping Center. The SUV went off the roadway and down a 30 foot embankment smashing into a tree.

The CHP has released new information detailing that the 1999 Green Chevy Suburban was being driven by 18-year-old Octavian Hernandez of Sonora, who is a Summerville High School football player. Hernandez who plays the positions of strong safety and tight end for the varsity team was reportedly heading home from practice when the accident occurred. He was taken by ambulance to Adventist Health Sonora and treated for minor injuries and released. The details on his exact injuries were not provided.

A text message sent out to teammates by Summerville’s Varsity Football Coach Sean Leveroos shared that Hernandez was able to go home last night and he even gave the coach a positive message to relay to the team as they head to Amador to take on the Buffaloes.

That game can be heard live on at 7pm on 93.5 KKBN and streamed on myMotherLode.com. For the schedule of all Mother Lode games tonight, click here.