A First Win And A Shutout 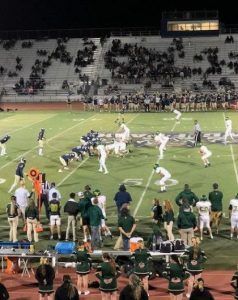 The Sonora High Wildcats got in the win column on the road 36-21 over the West Wolfpack.

The Wildcats started the game on defense and shortly into the game Evan Bearden grabbed a wayward West pass and returned it 58 yards for the first score of the game. The point after would miss and the first quarter ended with the scoreboard reading 6-0.

In the second quarter, the Wolfpack tied it up early on a 12 yard touchdown run but the point after attempt would fail, tying the game at 6-6. Bearden added offensive points hauling in a 31 yard pass from Quarterback Jake Gookin. Karson Clifton would add two more on the conversion and the Cats took back the lead 14-6. The Sonora offense put together another time consuming drive capped off by Michael McKernon plunging from 1 yard out for the score. After a West penalty on the point after kick, Clifton converted another two-point attempt and it was 22-6, Wildcats.

The third quarter would see the Sonora offense add to its point total on a 1 yard rush by Nicholas Crockett and the kick would be good taking the score to 29-6 in the Cats favor. West would strike back on a beautiful 63 yard pass reception, with most of the yards coming after the catch. The Wolfpack converted the kick and cut the Wildcats lead to 29-13.

In the fourth quarter, Dalton Tarter would take the ball from his slot back position and score from 3 yards out. With the extra point kick good the Cats extended their lead 36-13. West would add another touchdown and convert a two point try, but the scoring would end and the Wildcats were victorious, 36-21.

The team (1-4) is off next week with a bye. The Friday after (9/28) Sonora travels to Angels Camp to open league play against the Bret Harte Bullfrogs.

Summerville Shut Out by Pitman

Summerville Bears made the road trip out to Turlock to face off with the Pitman Pride and we’re shut out 42-0.

Pitman move to 5-0 on the year and are a division 1 school. This was an unusual meeting for the two teams and due to the size advantage Summerville was in for a true battle. The Pride  flashed some of their offense on Summerville but mainly used all of their wide receivers and running back Payton Bass to score the majority of the points.

There were very little bright spots in this game for the Bears, who frankly we’re in some culture shock making the trip down to Turlock. Pitman high has over 2,000 students and the roster of the football team was only one less than an NFL squad.

This was the first road game of the year for the Bears and was an opportunity to learn how the game is played at such a faster pace and higher level. Summerville is a division 4 school, so this meeting with the Pitman Pride taught them something and will most definitely make them much more mentally tough moving forward.

Summerville moves to 1-3 on the campaign, in a division that is seemingly open for anyone at this point. The Bears will play one last team outside of the Mother Lode League Friday at home, before facing some more familiar foes. Fremont Of Oakland, will make the commute from the Bay Area to battle the Bears, in a week 6 match up live from Summerville High next Friday.

Calaveras rolled over Sacramento’s Bradshaw Christian, 57-7. The team (1-3) takes on the Stellar Prep. Thunder (1-3) out of Oakland next Friday at home. Bret Harte had a bye week. The Bullfrogs (1-3) hop over to taken on the Linden Lions (2-2) next Friday.