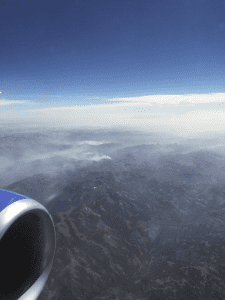 Update at 2:30 p.m.: Forest Service officials report that a second vegetation fire ignited near the Donnell Fire burning in the Stanislaus National Forest this afternoon.

The new blaze, dubbed the “Cliff Fire,” broke out just ten miles east of the Donnell Fire in the Humboldt-Toiyabe National Forest wilderness. Forest Fire officials tell Clarke Broadcasting that a helicopter with a repelling crew on board flew to the area, but once on scene discovered that the fire had extinguished itself. There were no details regarding the size of that blaze.

The Donnell Fire’s acreage and containment has not budged for the past several days, remaining at 35,864 and 62% respectively. More details in a timeline about the Donnell Fire is here. Suppression efforts continue to focus on structure defense preparation in the Highland Lake area where crews are widening roads to create larger fire containment lines.  Another key strategy, according to forest fire officials, is limiting the flames from spreading north/northeast towards Boulder Lake and the Pacific Crest Trail. Crews are also working suppression repair and hazard tree mitigation in the Eagle Creek Drainage area on Eagle Meadow Road (5N01).

The number of personnel has decreased to 489 along with 10 hand crews, 7 helicopters, 9 engines and 5 water tenders. Details regarding the lifting of evacuations, another base camp set up on Highway 4, travels on Highway 108 and a helicopter crash landing yesterday can be viewed below.

Forest Fire officials remind the public that the Forest Closure Order is still in effect. The order includes the areas along Highway 108 from Eagle Meadow Road to Kennedy Meadows (all residences and campgrounds, except Baker and Deadman) as well as all along Eagle Meadow Road (5N01) and the Clark Fork Road area. Travel is allowed in that area, but stopping or deviating from the highway is prohibited. Pulling over to take selfies has been a problem in the area, especially this weekend, as reported here yesterday. The Mill Creek advisory evacuations remain in effect.

Forest Service spokesperson Kimberly Petersen tells Clarke Broadcasting that a separate base camp is being set up today in Bear Valley to supply spike camps along Highway 4. As was detailed here yesterday, more resources had been brought in to man the station. Additionally, as first to report here last night, a helicopter battling the blaze had to make a crash landing last night inside the fire’s perimeter.

The fire’s containment and acreage remain at 35,684 and 62-percent respectively.