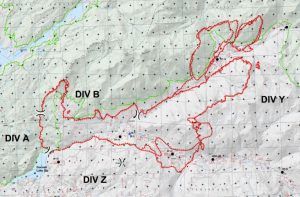 Update at 1:35pm: New maps have been released of the Donnell Fire burn area. See the image box and below for more.

A summary of our news articles about the Donnell Fire is here.

Update at 11:45am: The Tuolumne County Board of Supervisors voted to ratify the local emergency declaration related to the impacts of wildfires.

The vote was 4-0 with Supervisor Sherri Brennan absent. It was noted that she and her family are helping to move cattle from the fire area.

Tuolumne County Office of Emergency Services Coordinator Tracie Riggs announced that the county has started a community information phone line related to the Donnell Fire. It is 533-5800. Forest officials will be contacting individuals about their structure as soon as they have that information.

Sheriff Bill Pooley reported that everyone was evacuated safely from the fire’s path this past weekend, no one is currently missing, and there were no fatalities. He praised the responders, and also the local neighbors, for helping one another out, and watching out for each other.

Deputy Forest Supervisor Scott Tangenberg and CAL Fire Chief Josh White spoke about the growth of the fire and strategies. Structure protection remains the first priority, while the fire continues its path toward more wilderness area. White noted that the fire made a five mile run up a canyon on Saturday, and the winds shifted on Sunday pushing it over toward Dardanelle Resort. The mild weather conditions over the past 24 hours have given extra time for firefighters to protect structures and cabins in the evacuation zone.

The Stanislaus National Forest has downgraded the size estimate this morning. After earlier indicating that it is up over 13,200 acres, the new size estimate is 11,340 acres, according to Forest Service spokesperson Maria Benech.

Total personnel of 481 assigned to the incident include seven hand crews, three helicopters and 18 engines.

Original story posted at 6:20am: Tuolumne County, CA — The Donnell Fire burning in the Stanislaus National Forest is up to 13,200 acres and there is only two percent containment.

410 firefighters are now on scene and the incident command team has placed orders for many more.

The Highway 108 corridor remains under a mandatory evacuation order between Eagle Meadow and the Tuolumne/Mono county line on Sonora Pass. Structure protection remains the top priority, and once the threat is mitigated, the focus will shift to overall containment. The weather was favorable yesterday as the inversion layer stayed low for most of the day, limiting fire activity. Similar conditions are anticipated over the next couple of days, before the weather is expected to shift later in the week.

Around 15 structures were destroyed when the fire erupted on Sunday afternoon and 234 are threatened. We know that the hardest hit areas include the Dardanelle Resort and Brightman cabins. The forest service has been contacting cabin owners directly about whether their structures are still standing.

The cause of the Donnell Fire remains under investigation. At a community meeting in Pinecrest yesterday,  Summit and Mi Wuk Ranger District Supervisor Sarah LaPlante emphasized that, despite rumors, it was never a fire being allowed to burn out naturally for resource benefit. She stated, “Since day one, this has been a full suppression, ‘put it out’ fire. I want to make sure everybody understands that.”

Click here to view a recap of the fire’s activity yesterday. 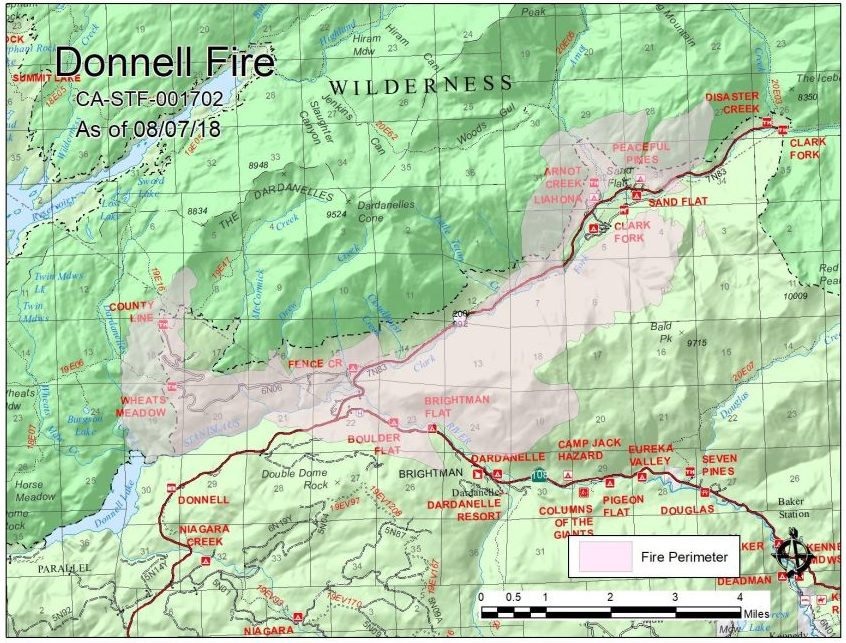