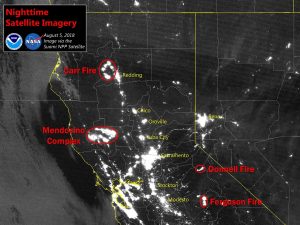 Mariposa, CA — The Ferguson Fire that ignited on July 13 has surpassed the size of last year’s massive Detwiler Fire in Mariposa County.

The Detwiler Fire that ignited last July burned 81,826 acres, and officials report today that the Ferguson Fire is up to 89,633 acres. Containment remains 35-percent. Last night the fire grew nearly 8,000 acres. Crews continue to stage along Highway 140, and near the communities of Foresta and Wawona, to protect structures. Officials are doing tactical firing operations to build containment lines around the fire’s perimeter.

Yosemite Valley remains under a mandatory evacuation order due to a loss of power, smoke and hazardous road conditions. It is unknown when the order will be lifted. There is still access to some of the outer areas of Yosemite via the eastern entrance of Highway 120 near Lee Vining. 995 structures remain threatened due to the fire and 10 have been destroyed. 2,700 firefighters remain assigned to the incident.

To read about the Parrotts Fire in Calaveras County, click here.

For information on the Donnell Fire in Tuolumne County, click here.

A timeline of Ferguson Fire information is here.