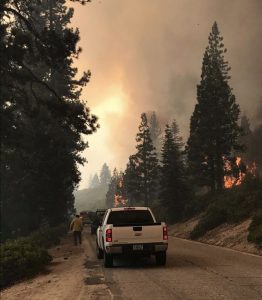 A timeline of the Donnell Fire is here.
Update at 10pm: There is much concern about the Dardanelle Resort this evening as the Donnell Fire in the Stanislaus National Forest was very destructive today. Clarke Broadcasting has learned that there were multiple structures destroyed by the fire and the resort notably took a heavy hit.

The resort added on social media this evening “we have heard that the resort has burned.”  It is anticipated that the Forest Service will put out an official statement soon as information is being gathered. The fire itself is now estimated to be over 6,000 acres.

Update at 4:58pm: The Tuolumne County Sheriff’s Office has added Forest Service Road 5N01 to the list that is under a mandatory evacuation order due to the Donnell Fire. It includes the area stretching to Haypress Meadow (Eagle Meadow Road, Niagara Creek and Niagara OHV Park). The earlier evacuation orders remain in place. The latest size estimate remains 5,814 acres and there is no containment.

Update at 11:40am: Thanks to better mapping today, the Stanislaus National Forest is now estimating that the Donnell Fire is 5,814 acres. It grew around 5,000 acres yesterday. Strong winds in the afternoon pushed the fire into the Carson-Iceberg Wilderness. It is burning in steep and rugged terrain. The fire has expanded into the area that burned during the 2017 McCormick Fire, slowing its growth on the northeast flank. Crews continue to prep for structure protection along the Highway 108 corridor between Clark Fork and Kennedy Meadows. Last night crews cleared vegetation around the Double Dome   repeater and will continue to monitor that area today.

This morning the Central Coast Interagency Management Team took over operations of the fire from the Stanislaus National Forest. A mandatory evacuation order is in place from Eagle Meadow Road to Kennedy Meadows. Only drivers leaving the evacuated area are allowed to travel on an eight mile stretch of Highway 108 near the fire area.

A map of the Donnell fire is here.

Update at 9:10am: The Tuolumne County Sheriff’s Office reports that the Highway 108 corridor, from the Clark Fork campgrounds through Kennedy Meadows resort, is now under a mandatory evacuation order. Highway 108 near the fire is only open for those evacuating from the area. The latest size estimate of the Donnell Fire is 1,750 acres. The evacuation center remains open at the Seventh Day Adventist Church in Sonora.

Original story posted at 6:30am: Tuolumne County, CA — The Stanislaus National Forest reports the Donnell Fire off Highway 108 near Donnell Vista is 1,750 acres and there is no containment.

The growth was relatively slow early yesterday until the inversion layer lifted at 11am. Spokesperson Diana Fredlund reports that 200 people were evacuated as the fire is threatening a combined 225 structures and outbuildings.  A mandatory evacuation order remains in place for the area stretching from the Clark Fork campground to the Dardanelles resort. An advisory evacuation notice is in place from Dardanelles to Kennedy Meadows. 65 cabins and five large campgrounds in the Brightman area were evacuated, while 88 cabins, two resorts, and several large campgrounds are under the advisory.  Yesterday the fire crossed the Stanislaus River and it has been burning to the northeast. Crews are trying to keep it north of the Middle Fork of the Stanislaus River, south of Spicer, west of Bald Peak and east of Dome Rock. The fire has been burning through roughly two feet high brush, timber litter and understory, according to the forest service.

There is a hard closure of Highway 108 at Eagle Meadow. 207 firefighters are assigned to the incident, 16 engines, three helicopters, four hand crews, two dozers and two water tenders. High temperatures are again projected over the coming days and a Red Flag Warning is in place for high winds.

An evacuation center remains open at the 7th Day Adventist Church in Sonora. Click here to view a story from yesterday detailing the fire’s activity.

The fire ignited at around 5:45pm on August 1st and the cause is under investigation.