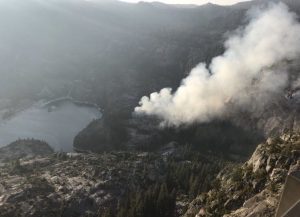 A timeline of the Donnell Fire is here.
Update at 7:55pm: The Donnell Fire in the Stanislaus National Forest has grown to 1,500 acres, according Forest Service spokesperson Diana Fredlund.

Some large air tankers have been spotted near the fire this evening, including a DC-10. All of the earlier evacuation advisories and orders remain in place.

Also, an American Red Cross shelter is open this evening at the 7th Day Adventist Church in Sonora. Small pets are acceptable.

Update at 4:10pm: Caltrans reports that an eight mile stretch of Highway 108 is closed due to the Donnell Fire. The closure begins 13 miles east of Strawberry. You will need to find an alternate route. The CHP indicates the closure is due the fire jumping the Stanislaus River and moving toward that stretch of Highway 108. The latest size estimate is 1,000 acres and there is no containment. The earlier evacuation orders and advisories remain in place.

Update at 2:20pm: The Tuolumne County Sheriff’s Office reports the area between Clark’s Fork campground and Kennedy Meadows, including the resort, is under a mandatory evacuation order. The latest size estimate of the Donnell Fire is 1,000 acres and there is no containment.

Original Story at 7:30am: Tuolumne County, CA — Forest Fire officials report problems in getting the aircraft in the skies and their overall strategy to combat the 600 acre Donnell Fire’s flames.

Forest Service spokesperson Diana Fredlund details, “During morning hours the fire is under an inversion and actively burning in timber and brush, with movement driven primarily by terrain. Once the inversion lifts around noon, the canyon winds increase to 25 mph and that causes the fire to drastically increase its rate of speed.” She explains, “That means Aircraft are restricted in the morning due to smoky conditions and the inversion, but also restricted later in the day due to high winds.”

Fire officials relay that the main strategy is to keep the fire north of the Middle Fork of the Stanislaus River, south of trail 19E06 and east of Dome Rock.

Evacuations were ordered for the areas of Wagner Tract and the Clark Fork area, as reported here yesterday.