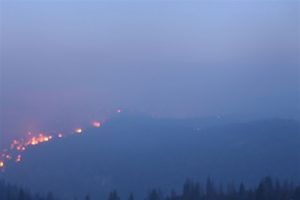 Update at 7:45pm: The Ferguson Fire grew nearly 1,000 acres today, and it is currently 81,699. Containment on the fire remained 36-percent. The fire was particularly active today burning near the western end of Foresta near the site of 2012 El Portal Fire. Crews were successful keeping the blaze out of the communities of Foresta and Yosemite West.

Original story at 6:50am: Mariposa County, CA — The new numbers this morning for the Ferguson Fire burning in Mariposa County show the fire climbed another 3,548 acres and hit 80,755 acres while the containment slipped back to 36-percent.

Incident Command reports that Friday afternoon, a spot fire ignited inside the Yosemite National Park boundaries, west of Wawona Road (Highway 41) was  heading towards Badger Pass. That prompted evacuations along the corridor fearing shifting winds overnight could bring the fire back into the communities. Earlier in the day, another spot fire broke out in the Crane Creek drainage southwest of Foresta after the flames jumped the Merced River. Overnight crews patrolled these areas to monitor the fire. Fire officials state the priority is keeping the communities of Foresta and Yosemite West safe, along with securing the northern and southeastern perimeters of the fire. They note that firefighters were successful in keeping the flames from spreading into Foresta and Yosemite West.

Crews were able to complete tactical firing along Pilot Ridge on the Mariposa-Tuolumne county line on the north side of the blaze. Firefighters also strengthened containment lines and mopped up around two spots fires southwest of Wawona.

Incident Command reports warmer and drier conditions are fueling increased fire behavior and spotting, which will continue to create more smoke columns in the skies over the blaze.

A timeline of Ferguson Fire updates is here.