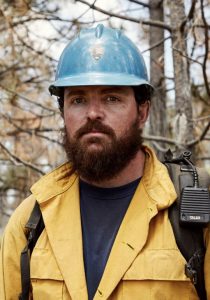 This is Day 17 of the Ferguson Fire, more updates are here.

Update at 8:40pm: The firefighter killed today while battling the Ferguson Fire has been identified as Captain Brian Hughes of the Arrowhead Hotshots with the Sequoia and Kings Canyon National Park. As reported earlier, he was killed after being hit by a falling tree.

The unidentified firefighter was from the Sequoia and Kings Canyon National Park. Limited details regarding what led to the fatal injury have been released, but it happened this morning on the Sierra National Forest. The firefighter and his crew were involved in a tactical firing operation on the east side of the fire. They were operating in an area hit hard by tree mortality, and the firefighter was struck by a falling tree.

To read an earlier story from today detailing efforts to contain the fire, click here.