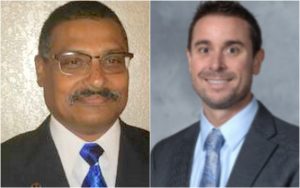 Modesto, CA — A recommendation is headed to the Yosemite Community College District (YCCD) Board today ahead of an anticipated decision on a successor to retiring Columbia College President Dr. Angela Fairchilds.

As we reported here last month, following a nationwide search initiated in January, a special committee ultimately settled on two finalists, Dr. Santanu Bandyopadhyay, who has served as Executive Vice President of Educational Programs and Student Services and Director of Institutional Research and Planning at Southern California’s Cypress College; and Dr. James Todd, who has held the posts of Vice President of Student Services and Professor of Anthropology and Academic Senate President at Modesto Junior College.

Both candidates had the opportunity to make presentations and take questions from the public at separate forums held at Columbia College. According to YCCD spokesperson Coni Chavez, following separate, subsequent interviews with both, YCCD Chancellor Henry Yong sent his recommendation — Dr. Bandyopadhyay — along to the board for its consideration. She adds that the trustees anticipate making their decision while meeting this evening and plan to release an announcement sometime around 7:30.