Candidates Spar On Issues Ahead Of Election 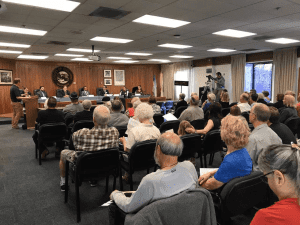 It aired live on AM 1450 and FM 102.7 KVML and was streamed on myMotherLode.com. The night started with the candidates on the stage for District Two Supervisor, Randy Hanvelt, Ryan Campbell, David Titchenal, and District Three Supervisor, Merv Cancio, Anaiah Kirk, Aaron Rasmussen and Laurie Sylwester, taking questions on topics like affordable housing, the projected deficit, keeping young families in the county, homelessness and marijuana.

Later the four Sonora City Council candidates, David Axelrod, Kurt Bryant, Jim Garaventa and Colette Such, were asked about topics ranging from Vision Sonora to the economic health of the downtown district.

The final segment featured Tax Collector candidates Justin Birtwhistle and Michelle Ronning speaking about their background and what they would bring to the position. All of the candidates also had time to make opening and closing statements.  It was a packed house in the supervisors meeting room. You can find the entire archived audio from the forum by clicking here.