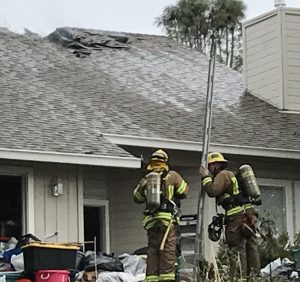 Sonora, CA — A fire in the 700 block of North Arbona Circle caused extensive damage to a least the roof of the residence.

The fire was reported to the Sonora Fire Department at around 9am this morning. Fire Captain Brittan Gregory says, “When we arrived on scene there was light smoke coming from the attic of the two story residential structure. We’re getting a handle on it, and getting it knocked down. As of right now, the cause is still under investigation.”

The homeowner, Carol Doud, tells Clarke Broadcasting that it appeared as though the fire ignited from the HVAC unit. Doud, well known for attending and speaking up at various government meetings in the county, and volunteering free time to pick up litter and garbage throughout the city, was not injured in the fire. It is unclear the total extent of the damage.

The Red Cross has been called in to assist.