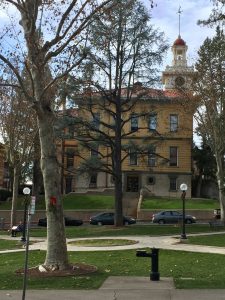 Sonora, CA — After hearing concerns regarding the type of pole, location, need, and cost, the Tuolumne County Board of Supervisors agreed to personally foot the bill to put a new flagpole in the center of courthouse park.

It was noted at today’s supervisors meeting that the issue of placing a flagpole in the center of courthouse park has been discussed at various Tuolumne County Historic Preservation Review Commission meetings over the past year, but there was no agreed upon consensus as to whether it should move forward. The original flagpole was removed in 2015 as part of a county tree removal and restoration project in the park.

A member of the commission, Sharon Marovich, told the supervisors this morning she was opposed to having a pole placed at the center of the park because the flagpole was originally off towards the side when the park was dedicated in 1936. Noting that the park was placed in the National Register of Historic Places in 2006, she felt it was inappropriate to move the location. She also called for the county to use wood for its new flagpole, same as the original, rather than aluminum.

Community member Jim Phelan took issue with using wood, and urged the board to use aluminum citing that it lasts longer and is less susceptible to vandalism.

Peggy Kingman urged the board to instead put up a peace pole at the center of courthouse park.

Carol Doud questioned the need and cost of the pole, citing that money could be used for other causes, and noted the difficulties of properly maintaining existing flags downtown.

Mike Albrecht praised the idea of putting a flag at the center of courthouse park, and urged the board to approve it.

When the public comment period closed, Supervisor Evan Royce spoke passionately about what the flag represents, and stated he would personally cover the $2,600 cost of the project. Supervisors Karl Rodefer, John Gray and Randy Hanvelt added that they would also foot their share of the bill. Since supervisor Sherri Brennan was absent, and they wanted to give her a chance to pledge towards the project as well, the board moved to approve the flagpole at the center of courthouse park, with the caveat that the funding will be covered by the supervisors. It was approved with a 4-0 vote.