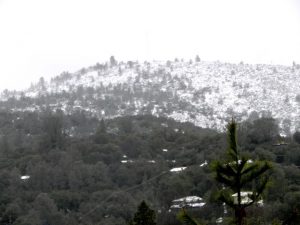 Snow Is Visible From Downtown Sonora

According to the National Weather Service, snow levels will lower to around 3,000 to 4,000 feet Tuesday night and then below 2,000 feet by later Wednesday.

Three to six inches of snow is expected above the 4,500 elevation while some of the higher peaks will see up to eight inches of snowfall accumulation.

Locally gusty southwest winds up to 50 mph or higher should be expected through the mountain passes.

Motorists traveling into the mountains should be prepared for winter weather conditions and carry chains. Slick roads can be expected.

Rainfall totals will be under a quarter inch for the Northern San Joaquin Valley with up to three quarters of an inch over portions of both the Mother Lode and the Sierra Nevada.

Improving conditions are expected Wednesday night behind the system.