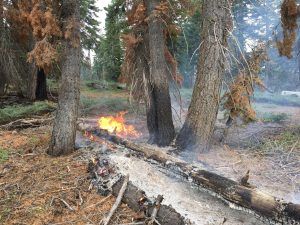 The Summit Complex Fire off Highway 108 near the Dardanelles is 5,161 acres and 35-percent contained. There are 14 firefighters still on scene. It is made up of four separate lightning caused fires in the Summit Ranger District, the 4,332 acre McCormick Fire, 418 acre Bummers Fire, 311 acre Douglas Fire and the 100 acre Willow Fire. The forward spread has stopped on the Douglas and McCormick incidents, the Willow Fire (west of Groundhog Meadow) has had very minimal growth over recent days and the Bummers Fire (near Bummers Flat) has had moderate growth.

Meanwhile, the Creek Fire (near Clear Lake and Bourland Mountain) in the Mi-Wok Ranger District is 1,520 acres. It is 75-percent contained and there are 18 firefighters still on scene. A stretch of the nearby Rock Creek Trail remains closed.