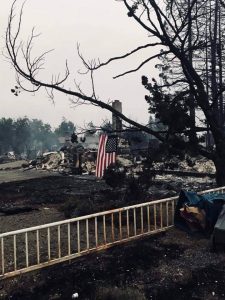 Update at 4:15 p.m.: Cal Fire confirmed this afternoon that 38 people have died in the Northern California wildfires. Most of the deaths occurred in Sonoma County with 20 victims; Mendocino County had eight, Napa County had six and Yuba County had four. Cal Fire fears those numbers will climb in the coming days.

Governor Jerry Brown and U.S. Senators Dianne Feinstein and Kamala Harris are in Santa Rosa in Sonoma County this afternoon to see the devastation first-hand and talk to those directly impacted by the deadly fires. Brown and Feinstein remarked that they have never seen a more destructive and deadly wildfire in their lifetime.

Update at noon: Governor Jerry Brown and U.S. Senators Dianne Feinstein and Kamala Harris will travel to Santa Rosa in Sonoma County today to see first-hand the devastation and talk to those directly impacted by the deadly fires. The law makers will attend a private briefing with local leaders and emergency management officials at 2 p.m. They will then join a community meeting in the city, hosted by partners including the City of Santa Rosa Fire Department, Sonoma County Board of Supervisors, CAL Fire, the Governor’s Office of Emergency Services and the City of Santa Rosa.

Additionally, Brown confirmed that the White House has approved the state’s request for direct aid to individuals and families in Butte, Lake, Mendocino and Yuba counties. Thursday he announced that federal funds had also been secured for Napa and Sonoma counties.

Original post at 8 a.m.: Authorities have confirmed three more deaths from the wildfires burning in Northern California, bringing the total to 35. The flames have burned over 214,000 acres and destroyed at least 5,700 homes and businesses. Wind-fueled flames force new mandatory evacuations in Napa and Sonoma counties this morning. A lucky few of the nearly 100,000 people who fled their homes got to return last night. California Forestry and Fire Protection spokesman Daniel Berlant said Friday that the numbers make this the deadliest and most destructive series of wildfires in California history.

Efforts to determine what might have sparked the wildfires has prompted state regulators to direct PG&E to preserve any evidence of failed poles, conductors or other equipment that might be connected to the deadly blazes. Word of the directive sent the company’s shares plummeting by 10.5 percent yesterday. The steep one-day fall means the value of the giant utility, or market capitalization, dropped about $3.5 billion, from $33.1 billion to $29.6 billion.

California communities were getting glimpses of heroism and humanity. Examples of charity are everywhere, along with a sign that began popping up in more and more places reading: “The love in the air is thicker than the smoke.” The Sonoma County Sheriff’s Office has released dramatic body camera footage showing the heroism of  a deputy braving the flames and saving lives. The footage does contain some explicit language, but the sheriff’s office is urging all Californians to watch the video as it shows just how life threatening wildfires can be and why it is important to evacuate when orders are issued.  (The video can be viewed in the image box.)