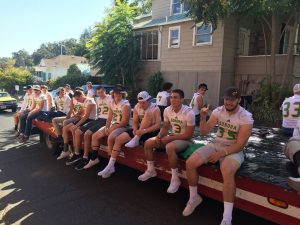 Sonora, CA — A homecoming victory for one team and another team is back on track with a win in week eight of the high school football season.

Before the homecoming dance, the senior class named the Spirit winners, and senior, Riley Patterson announced as the 2017 Homecoming Queen, the Sonora Wildcat football team celebrated by putting points on the scoreboard with a big win over the Linden Lions 56-12.

Rico Sanchez started the scoring early in the opening quarter with a 15 yard rush on the Wildcats opening possession. Jack Camara added the two point try and Sonora was quickly up, 8-0. After a quick defensive stop, the Wildcats got the ball back and C.J. Castleman punched it in from three yards out, but the extra point was wide to the right. The Cats extended their lead 14-0. Sonora added yet another score in the first quarter when Mike McKernon took it from eight yards out carrying a good portion of the Linden defensive front with him. The extra point by Bryan Wynn made it Sonora 21, Linden 0. C.J. Castleman scored his second T.D. of the first quarter, rushing from six yards out and the extra point was good. The Wildcats lead 28-0 at the end of the first quarter.

Opening the second quarter, the Wildcats continued moving the ball and scoring points when Jake Gookin picked his own option and carried the pigskin 32 yards into the end zone. With a converted extra point, Sonora led 35-0. One of the Wildcats newest players, Devin Brisco, showed his increased confidence in the offensive play book and went 15 yards for a score. Wynn converted another point after try and Sonora lead 42-0. As the first half wound down, Carson Dambacher added a 14 yard run for a score and with the extra point the Wildcats went into the extended halftime ahead 49-0.

With Sonora dumping all of the players off of their bench into the game and the clock running due to the score, the second half moved at a breakneck pace. Sonora added only one touchdown when Carson Dambacher added his second score of the night from 24 yards out and Wynn would add his sixth extra point of the night taking the score to 56-0 in favor of the Wildcats. Wynn went six for seven on point after attempts with his only miss just curling outside of the upright.

Linden would add two scores in the fourth quarter with Senior Rowdy Reed rushing for 16 yards and 8 yards T.D’s, but both conversion attempts would fail, which were not even needed as Sonora High won not only their homecoming, but sixth straight game, 56-12.
Sonora is off next week with a bye.  On October 27 the team makes the journey to Argonaut to take on the 3-4 Mustangs.

The Summerville Bears corralled the Mustangs for their MLL battle Friday night with the intentions to bounce back from their first loss against Sonora. At 5-1 the Bears faced the 3-3 Mustangs in a very scrappy battle. Summerville started the game with a Nick Veach touchdown run that would then be answered but one of three touchdowns reeled by Addison Cramer of Argonaut. However, the Bears would continue to bounce back after every score, as Dominic Esquviel capped a 47 yard touchdown run and then a 98 yard kickoff return by Luke Fulkerson. Before the half, trailing 28-7, the Mustangs were able to connect with Cramer again to make it 28-14.

The Bears had a tough time getting things going again at the start of the second half. Punting and then giving the Mustangs the ball that would lead to another Cramer catch and score.  From that point on, the Bears leaned on Dominic Esquviel to carry the load. He was able to rush in for a 36 yard score that would hold off the Mustangs for the rest of regulation. Although the Mustangs were able to pound in a four yard rushing touchdown, they still trailed by five and would end up losing on home turf. Summerville moves to 6-1, its best record in the last four seasons.

Next Friday night they make the trip to Bret Harte to take on the Bullfrogs (1-6) who lost to Amador 34-27. Calaveras (6-1) had a bye-week and take on Amador.