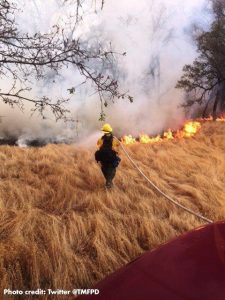 Update at 6:36 p.m.: CAL Fire has supplied another update as to progress on the devastating Northern California wildfires that have drawn national multi-agency responders.

Update at 5:15 p.m.: According to CAL Fire officials, who anticipate casualty figures to continue rising, official deaths from this week’s unprecedented wave of wildfires now stand at 32.

At least 3,500 homes and businesses are destroyed. The blazes have chased about 90,000 people from their homes — roughly half of them to evacuation centers. Town hall meetings are called for tonight at 7 o’clock in the Sonoma Veterans Building to provide status updates on the fires. Governor Jerry Brown’s office reports that he will join U.S. Senators Dianne Feinstein and Kamala Harris tomorrow afternoon in Sonoma County with more details yet to come.

Update at 12:10 p.m.: State officials provided the latest information regarding California’s devastating wildfires that have now officially claimed 31 lives and burned 191,437 acres at a half-hour media conference that just wrapped up.

According to Cal-OES Director Mark Ghilarducci, in this fifth day of response efforts, state officials are reaching across state lines to draw mutual aid responders from Nevada, Idaho, Washington, Montana, New Mexico, North Carolina, South Carolina, Oregon and Arizona. Sharing his latest statistics, he says that there are currently 640 law enforcement officers involved in response efforts along with 8,000 firefighters and 650 fire engines.

He adds that 4,800 people are now in 42 evacuation shelters opened across the state and 2,000 special needs cots and other services are among the relief support. Since these efforts have been in place personnel have provided 40,000 meals and 60,000 liters of water. Although the fires damaged 77 cell towers, so far 64 are back in service.

CAL Fire Director Chief Ken Pimlott explains that yesterday’s 22 large active fires are now being counted as 21, due to two more fires being merged. He adds that the Wind Complex Fire (Nevada, Yuba, Butte counties)/Cascade Fire is now 45 percent contained and the McCourtney Fire is 89 percent contained. The glimmer of good news here is that now some of the resources assigned to those incidents may now redeploy to other fires. The Sulphur Fire in Mendocino County is 55 percent contained; the Redwood Valley incident, at 34,000 acres is making progress in containment. The Chief adds that the two additional casualties since yesterday are from this county.

The Southern Lake-Napa Atlas Fire burning into Solano County, currently measured at 48,228 acres is 27 percent contained and showing very active fire behavior; the Central Lake-Napa Tubbs Fire, now at 34,270 acres is ten percent contained. With dry humidity and anticipated windy conditions through the weekend, additional resources and mutual aid have been requested and are en route. Chief Pimlott confirms that while active investigations are underway as to the causes of the fires, no information is currently being released. He acknowledges that numerous rumors and speculations are circulating and that public safety and firefighting are continuing to take precedence.

CHP Acting Commissioner Warren Stanley states that 300 CHP personnel are assigned and officers assisted the Sonoma County Sheriff with evacuations last night. CHP deployed 100 officers from Sacramento as well as Coastal, Central Valley and Bay areas to knock on 7,000 doors to evacuate residents and Sonoma Developmental Center patients and staff were relocated to the Dixon fairgrounds.

Federal military support has also been tapped across the service branches with more details to come as they become available.

Governor Jerry Brown also announced today that the White House has approved California’s request for direct aid to individuals and families in Napa and Sonoma counties who have suffered losses due to the fires. “We’ll keep working day and night with our local and federal partners to fight these fires and help residents get back on their feet in these trying times,” he states.

Original Post at 11:07 a.m.: Sacramento, CA — Firefighters gained some ground on fires burning in the heart of California’s wine country overnight but face another tough day ahead with low humidity and high winds blowing into the region.

Thousands of firefighters are battling 21 wildfires spanning more than 300 square miles and more crews are pouring in to help. New evacuations are still being ordered for fires that broke out Sunday night. However, some orders have been lifted in areas of Napa and Sonoma counties. Most of the fires have less than 10 percent containment but two of the largest fires containments have jumped. One in Sonoma has reached 25 percent and another in Napa and Solano counties has hit 27 percent.

The flames have claimed 31 lives and hundreds more are injured or missing. The fires have destroyed at least 3,500 homes and businesses. Smoke from the blazes is creating the worst air quality in the San Francisco Bay Area on record, sending people to the emergency rooms, forcing schools to close and people to wear masks when they step outside, according to state officials.

If you want to help out MyMotherLode.com invites you to donate to recovery efforts, with a list of Foundations that support local nonprofits in the areas that have burned. Just go to the homepage and click on the Wildfire relief button or here.