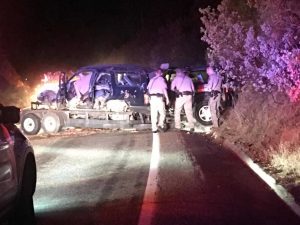 Tuolumne County, CA — The CHP is looking for the driver of a truck that left the scene of a collision on Tuolumne Road North near the Twain Harte Tree Farm.

Emails from witnesses to the crash prompted Clarke Broadcasting to inquire with the CHP, which released that a two-vehicle crash happened south of Moore Drive this past Saturday around 7:30 p.m. The CHP reports 55-year-old Elizabeth Porta of Twain Harte was driving a 2015 Jeep Wrangler southbound on Tuolumne Road when a trailer being pulled by a truck in the opposite direction swung into her lane. The trailer smashed into the jeep and broke free of the pickup, which took off from the scene. Witnesses stated that the truck returned to the scene shortly after the collision and then fled again.

Another witness, who contacted us, shared that two passersby freed Porta from the wreckage. She suffered major injuries in the crash and was taken by ambulance to Adventist Health Sonora, according to the CHP.

The CHP describes the truck as black or dark blue with a small lift and big wheels. The trailer was carrying a salvaged dark green Toyota 4-Runner. Anyone with information regarding the crash is asked to contact the Sonora CHP Jamestown office at 209-398-9844.