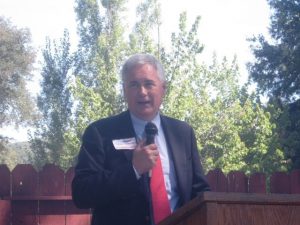 On Wednesday night, U.S. Representative Tom McClintock (CA-04) delivered a speech on the U.S. House Floor, about the state of our natural forests.

I want to thank Chairman Gosar of the Western Caucus for arranging this special order tonight. The wildfire crisis facing our forests across the West comes down to a simple adage. Excess timber comes out of the forest one way or the other. It is either carried out, or it burns out. But it comes out.

When we carried out our excess timber, we had healthy, resilient forests and we had thriving prosperous communities. Excess timber sales from federal lands not only generated revenues for our mountain communities, but created thousands of jobs. But in the 1970’s, we adopted laws like the National Environmental Policy Act and the Endangered Species Act that have resulted in endlessly time consuming and cost-prohibitive restrictions and requirements that have made the scientific management of our forests virtually impossible. Timber sales from the federal lands have dropped 80 percent in the intervening years, with a concomitant increase in forest fires. In California alone, the number of saw mills has dropped from 149 in 1981 to just 27 today.

Timber that once had room to grow healthy and strong now fights for its life against other trees trying to occupy the same ground. Average tree density in the Sierra Nevada is three to four times the density the land can support. In this weakened condition, trees lose their natural defenses to drought, disease, pestilence, and ultimately succumb to catastrophic wildfire.

The same politicians responsible for these failed laws have recently conjured up two excuses. One is climate change. The other is that we are putting out too many fires.

Putting out too many fires? That invites an important question. Which fires do they propose we let burn? The King Fire that almost wiped out the towns of Georgetown and Foresthill on its way to Lake Tahoe in 2014? Or perhaps the Detwiler fire this year that almost wiped out the town of Mariposa on its way to Yosemite Valley? Or any one of the more than 1,000 small fires in the Sierra that Calfire has put out this year – any one of which could have grown into a mega-fire but for the vigilance and competence of our fire agencies.

True, controlled burns play an important role in clearing out underbrush – but as firefighters bitterly complained to me at the command center at the Detwiler fire, these same laws make it virtually impossible to get permits to do the controlled burns.

The other reason we hear is that old dependable, climate change. Let’s put that to the smell test.

Throughout our vast forests, it is often very easy to visually identify the property lines between well managed private forests and the neglected federal lands – I’ve seen it myself on aerial inspections. The managed forests are green, healthy and thriving. The neglected federal forests are densely overcrowded and often scarred by fire because we can’t even salvage the fire-killed timber while it still has value. How clever of the climate to know exactly what is the boundary between private and government lands!

And if carbon dioxide is the problem, doesn’t it make sense to mill fully grown trees to sequester the carbon and replace them with young, growing trees that absorb much higher amounts of carbon? Again, the same laws prevent this.

This is not complicated. Our forests are catastrophically overgrown. Drought is a catalyst – it is not a cause. In overgrown forests, much snow evaporates in dense canopies and cannot reach the ground. The transpiration volume in an overgrown forest is a problem in normal years – in a drought it becomes lethal.

Pestilence is a catalyst – it is not a cause. Healthy trees can naturally resist bark beetles – stressed trees can’t. A properly managed forest matches the tree density to the ability of the land to support it. But we cannot properly manage our forests because of the laws now in place.