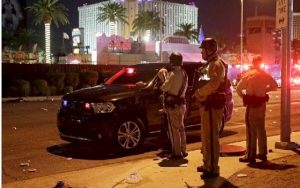 Update at 9am: Governor Jerry Brown has ordered flags to be flown at half-staff at the capitol in remembrance of those killed during the shooting in Las Vegas.

The Governor says, “Our prayers and deepest sympathies are with the families and loved ones of those killed and injured in last night’s tragic and senseless shooting and we stand with the people of Nevada in this difficult time.”

Original story posted at 7am: Las Vegas, CA — Hearts are heavy for Las Vegas this morning.

At least 400 people are injured, and 50 are confirmed dead, from a mass shooting at a concert last night on the strip. A gunman, identified as 64-year-old Stephen Paddock of Mesquite, Nevada, opened fire from a window of the nearby Mandalay Bay. He eventually turned the weapon on himself.  Several guns were found in his room.

The Associated Press reports that a California police department had one of its off-duty officers shot during the attack. A group of officers from the Bakersfield Police Department were attending the Route 91 Harvest Music Festival when Paddock opened fire.

State lawmakers are starting to weigh in on the tragic attack, and giving condolences. Democratic US Senator Kamala Harris says, “Our hearts break for the victims and their families and our thoughts are with those wounded after the horrific Las Vegas shooting.” House Republican Majority Leader Kevin McCarthy of California calls it “a senseless tragedy,” and “the nation is praying for the victims and family.”

It is the deadliest mass shooting in the country’s history.