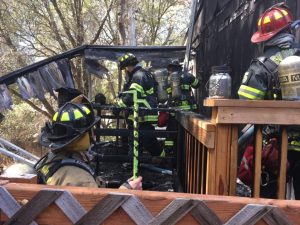 Update at 3:45 p.m.: New details regarding the fire at the Columbia Sky Mobile Home Park from Tuolumne County Sheriff’s spokesperson Sgt. Andrea Benson. She reports that the law enforcement that aided in extinguishing the structure fire were two deputies from the sheriff’s office. She states that they were the first on the scene and used hoses already at the trailer to put out the fire. Additionally, Sgt. Benson reports that the homeowner and two dogs were rescued from inside the trailer by the deputies. What sparked the fire is under investigation. Most of the damage was contained to a deck. (Further details regarding the fire are below.)

Update at 2 p.m.: CAL Fire reports that when law enforcement arrived  first on the scene, they saw smoke coming from the back of the home and were able to use an exstinguisher to put the fire out. The flames did not spread to vegetation or neighboring units. (Further details on the fire are below.)

Original post at 1:45 p.m.: Columbia, CA — Firefighter are on the scene of a structure fire in Columbia.

CAL Fire reports the back of the home is on fire, but the flames have not spread to any near by vegetation or neighboring units. The fire broke out on the 10900 block of Green Street at the Columbia Sky Mobile Home Park. There is no word as to whether any individuals were in the home. We will bring you more details as soon as they come into the newsroom.