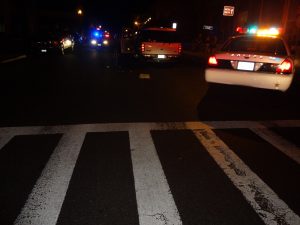 Vehicle vs. pedestrian crash on Washington Street in Sonora

Update at 7:20 p.m.:  Sonora Police Sgt. Tim Wertz reports that the mother and son were the last of a group to cross the roadway. He details, “The subject in the vehicle did not see the last two in the group and struck the 23-year-old mother and baby. They are in stable condition. The female was complaining of leg pain. She was flown to Modesto. The baby had a bump on the head and was flown to UC Davis.” (Further information on the crash can be viewed below.)

The accident happened just before 8 p.m. at the Jackson Street intersection. Sonora Police report a 23-year-old mother and her 1-year-old son from Woodland were within the marked crosswalk on Washington Street when a northbound 1999 Ford SUV struck them. Behind the wheel was a 78-year-old Sonora man.

Both the mom and baby boy sustained moderate to severe injuries and were taken out of Tuolumne County for medical treatment, according to the SPD, which adds that their injuries are not believed to be life-threatening.

No names are being released at this time as police state that the cause of the collision is unknown and an investigation is ongoing.