Repopulation In Progress On The Railroad Fire Impacting Yosemite 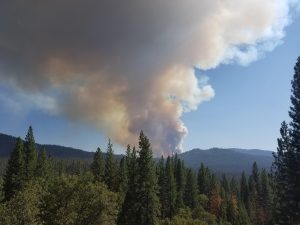 The blaze, which is impacting Yosemite National Park, is burning in the Sierra National Forest along Highway 41 between the communities of Sugar Pine and Fish Camp.  With the hike in containment, park officials have lifted evacuations in those areas and have released this tentative timeline for repopulation:

The flames have destroyed 17 structures and still threaten 500 while a total of 1,045 fire personnel continue to battle the blaze. Today, crews will be extinguishing hot spots along the perimeter of the fire on the west and north flank at Rainier Creek. Park fire officials report that burning operations intended to improve the defense of the community of Cedar Valley have been successful. Additionally, bulldozers are creating a fire break on the northeast side of the fire around Big Sandy and above Speckerman Mountain.

Efforts to contain two other fires that are burning in the park appear to be working as the South Fork (6,640 acres, 47% containment) and Empire (5,637 acres, 55% containment) fires acreage and containment are holding steady.  Park officials are tracking this weekend’s forecast that calls for a slight chance of afternoon/early evening showers and thunderstorms for the next several days along with a slight warming trend beginning Sunday.