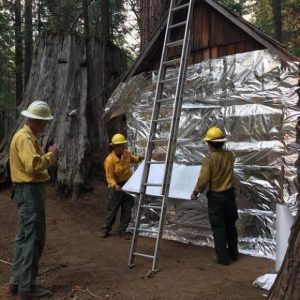 Fish Camp, CA — Thunderstorm activity pushed a wildfire burning in the Sierra National Forest, near Yosemite National Park, to the south yesterday, and the acreage is now 9,790.

The Madera County Sheriff’s Office issued a new evacuation order for Sky Ranch Road and Cedar Valley, and an advisory evacuation notice for the area north of Bissett Station Road, between Highway 41 and Round House Road. An evacuation shelter remains open at the Oakhurst Community Center.

That said, fire activity has notably died down near the community of Fish Camp, on the western flank, and mop-up there is underway. Caltrans is working to remove debris from Highway 41 so that vehicles can soon travel back into Fish Camp, and eventually Yosemite National Park.  Yosemite can only be accessed via Highway 120 or Highway 140.  The fire continues to burn through the Nelder Grove of Giant Sequoias in the Sierra National Forest. Nearby historic cabins have been wrapped with fire-proof material, in hopes of preventing damage.

800 firefighters are assigned to the incident, 13 hand crews, five helicopters, 89 engines and 12 dozers. Containment is estimated to be 23-percent, and full containment is expected by Friday, September 15. Wet or dry thunderstorms remain a possibility throughout this week.

Click here to view a map of the Railroad Fire