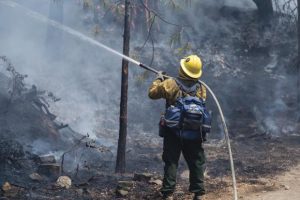 Yosemite, CA — With 25-percent containment reached on the South Fork Fire, including a strong line near the community of Wawona, many of the resources are starting to be released from the incident.

The number of firefighters assigned has dropped to 422. On Tuesday there were 765 firefighters.  Work has wrapped up on building and strengthening containment lines along the edge that borders Wawona. There was very small growth on the fire yesterday bringing the acreage to 4,188. Most of the current spread is occurring along the opposite, southeast and northern edge. Firefighters are using a combination of air support, direct line construction, and natural barriers to contain the blaze. It is situated in the South Fork Drainage of the Merced River. Drift smoke will continue to be an issue near the fire area.