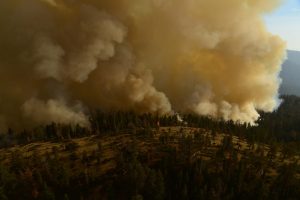 Update at 12:40pm: Yosemite National Park fire managers report that crews are having success building and strengthening containment lines on the west edge of the South Fork Fire. As of this afternoon, it is 3,473 acres and 10-percent contained. 758 firefighters are on scene. Mandatory evacuation orders remain in place in Wawona for the area east of Highway 41 on Forest Drive and Chilnualna Falls Road.

Original story at 6:55am: Yosemite, CA — The South Fork Fire burning near the community of Wawona in Yosemite National Park is up to 3,191 acres and it is 10-percent contained.

Parts of Wawona are still under a mandatory evacuation order as the fire is approximately a quarter of a mile outside the community. The fire is also posing a risk to the Mariposa Grove of Giant Sequoias, according to park officials. There are 758 firefighters on scene this morning. There were thunderstorms in the fire area over the weekend, causing erratic winds, and the burning remained very active on the western and southern flanks.  More thunderstorm activity remains possible through mid-week. The strategy in building containment lines includes lighting backfires, using air support and cutting direct fire lines. The fire was ignited on August 13.

Park officials have indicated that it may have been lightning caused, but an official investigation is still ongoing.