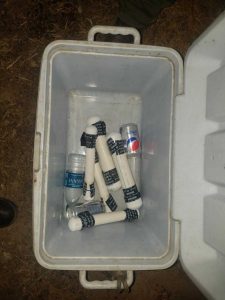 Twain Harte, CA – A bomb squad was called to a Twain Harte ball field after several pipes were discovered near a fence late last night.

The Tuolumne County Sheriff’s Office was alerted to the suspicious devices in a cooler located near a fence at Eproson Park. Once on scene, a deputy found some sealed PVC pipes with liquid inside of them. Not sure what the fluid was, sheriff’s officials decided, as a precautionary measure, to call in the Calaveras County Bomb Squad to examine the materials.  Sgt. Andrea Benson reports that the items appeared to be homemade ice packs. Unable to determine the liquid content of the pipes, bomb squad personnel detonated them in a controlled explosion with fire personnel on scene. Further study of the solution proved it to be non-explosive material.

Sheriff’s officials praised concerned resident for reporting the suspicious objects, reminding and urging the public that “if you see something say something.”