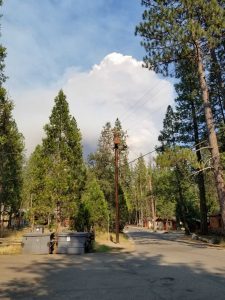 Yosemite, CA – The South Fork fire burning in Yosemite National Park and threatening the community of Wawona has grown minimally in acreage and containment.

Park officials have also announced that there will be a community meeting at the Wawona Community Center located at 7925 Chilnualna Falls Road at 6 p.m. on Saturday, August 19. The fire’s size is 2,407 up 111 acres and the containment has increased from five to seven percent. Currently there are 512 fire personnel battling the blaze along with these resources: 12 hand crews, 7 helicopters, 11 engines and 4 air tankers.

The weather conditions and high humidity levels have held the fire within the western and southern containment lines but the flames continue to slowly spread to the northeast into the Yosemite Wilderness. A warming and drying trend will be present across the region through the first part of the weekend with thunderstorms possible, according to Park fire officials, who add that burning operations will begin when possible to allow for the protection of Wawona and the Mariposa Sequoia Grove. Additionally, natural barriers such as rocks or streams, trails, and other minimal disturbance methods are being employed to contain the fire.

Smoke will continue to be heavy in the fire area and adjacent communities, especially in Wawona where it is expected to be very dense in the evenings and mornings. A voluntary evacuation remains in place for Wawona.