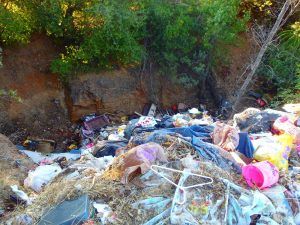 Sonora, CA — Two people were arrested after the Sonora Police Department received a tip about a couple illegally trespassing on a property and setting up an illegal marijuana grow.

The undeveloped site is situated off Trunkenmiller Road. Officers arrested 63-year-old Randy Henington and 55-year-old Cheryl Kersey, who were living at an abandoned house on the property, and growing marijuana in several gardens. Acting Police Chief Turu Vanderwiel adds that the couple’s 10-month-old grandchild was at the home when officers arrived, as well as a “vicious dog.” The couple had also been illegally dumping solid waste on the property, creating hazardous conditions, according to Chief Vanderwiel. Over 100 marijuana plants were seized and Heninton and Kersey were booked into Tuolumne County Jail.