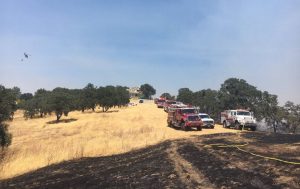 Update at 5:40 p.m.: According to CAL Fire spokesperson Lindy Shoff, the cause of the Quail Fire in Valley Springs was determined to be equipment-related.

She shares that the responsible party, who was using a push-behind lawn mower, was cited for not having proper equipment, such as a shovel, available within 25 feet and allowing the fire to escape control. (Further details on the fire can be viewed below.)

Update at 5:30 p.m.:  CAL Fire has just lifted evacuations relating to the Quail Fire in Valley Springs. Still at 50 acres is is now being reported as 55 percent contained and mop up is underway. The fire ignited within oak and brush between Highways 12 and 26 near La Contenta Golf Course. The fire center was within the 1900 block of Oak Hill Drive at Quail Oaks Road and the cause remains under investigation.

Update at 5:02 p.m.: The latest on the Quail Fire is that forward rate of progress has been stopped. The blaze, which still threatens structures and is still being described as at 50 acres in size with a moderate rate of spread,  remains confined to oak and brush area.

At this time the same evacuation information reported below remains in effect.

Update at 4:20 p.m.: Cal Fire spokesperson Lindy Shoff reports that an evacuation center supporting the Quail Fire has been set up at Jenny Lind Elementary School located at 5100 Driver Road in Valley Springs. Calaveras County Animal Control is there and available to assist with animal evacuations.

She also adds that crews are making progress as the Covey Lane area has been reduced to an advisory evacuation. Areas that remain under mandatory evacuations are Quail Oaks Road from Crown Court and Butler Lane to Dale Drive.

Update at 3:50 p.m.: Cal Fire has dubbed the blaze the “Quail Fire” and says it is now 40 percent contained while holding at 50 acres. Currently, 35 residents have been forced from their homes on several roadways listed below.

Original post at 3:30 p.m.: Valley Springs, CA — Cal Fire is reporting a now 50-acre vegetation blaze that is moving at a moderate rate of spread with five percent containment in Valley Springs.

According to CAL Fire spokesperson Lindy Shoff,  while the fire is currently threatening structures the flames remain in oak and brush. Numerous air resources, including Columbia, and ground resources are battling the blaze. The flames broke out in the 1900 block of Oak Hill Drive at Quail Oaks Road just off Highway 12. Evacuations are called for about 35 residents living on  Quail Oaks Road from Crown Court; Butler Lane to Dale Drive and all of Covey Lane. We will keep you posted as more details come into the news center.