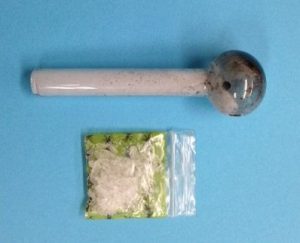 Drugs and pipe foud in search

Angels Camp, CA – A driver sped by an Angels Camp Police Officer prompting a traffic stop that netted an arrest and drugs.

The police officer pulled over the 2002 Mitsubishi Galant sedan for not only speeding but a broken brake light as well, according to Angels Camp Police. The stop was made on Highway 4 at the Vallecito Road intersection at around 3:15 a.m. last Friday.

According to Angels Camp Police, the driver, 31-year-old Kelly D. Roberts of Angels Camp, consented to a search of the vehicle. Inside the car, the officer discovered nearly one gram of suspected methamphetamine along with a smoking pipe.

Roberts was arrested but not taken to jail. Instead, he was cited on scene and released. He faces possession of a controlled substance and narcotic paraphernalia charges.

An Angels Camp man was arrested after a police officer found meth in his vehicle.