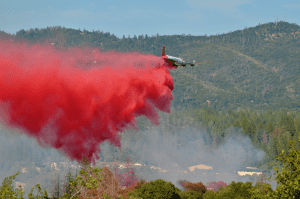 Update at 6:20 p.m.:  According to CAL Fire spokesperson Emily Kilgore, responders have stopped forward rate of progress on a three to four-acre vegetation fire on Chili Gulch Road by Bennett Road near Columbia Airport that broke out in the five o’clock hour and moved from grass into brush.

No structures are threatened and full containment is expected sometime tonight. The cause remains under investigation.

Thanks to Community Partners Ashley Diehr, Karen DuBose and Li Anne Horton for photography and Bonnie Stevens for video footage of fire air response. View both in image box.

Update at 5:50 p.m.: According to CAL Fire spokesperson Emily Kilgore, responders are making good progress fighting a vegetation fire on Chili Gulch Road near Columbia Airport that broke out this hour. It is currently being reported as three to four acres in size and did move from grass into brush. Columbia 83 Air Tanker has returned and is making some fire retardant drops and a helicopter from another air unit has just arrived on-scene.

Original Post: 5:36 p.m.: Sonora, CA — Ground resources are responding and aircraft are reportedly on order to a vegetation fire reported shortly into the 5 o’clock hour near Columbia Airport on Chili Gulch road off Bennett Road.

According to CAL Fire Columbia air resources are already committed to other fires. No other details are available as of yet. We will keep you posted as they come into the newsroom.