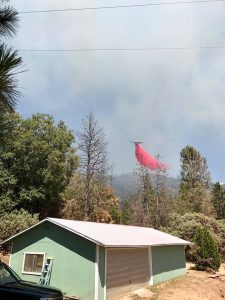 Update at 6 p.m.: Cal Fire reports crews will remain on the 50 acre Banderilla Fire near Lake Don Pedro mopping up overnight and checking for hotspots. The forward rate of spread has been stopped. (View further details on the fire below.)

Update at 5:30 p.m.: Cal Fire reports the Banderilla Fire burning in Mariposa County near Lake Don Pedro has grown from 20 to 50 acres but crews have stopped the forward rate of spread.  Some structures were threatened, but Mariposa Sheriff’s Office reports there are no evacuations. However several roads in the fire area have been closed, including a section of Banderilla Road, according to the CHP. (View further details on the fire below.)

The flames broke out off Banderilla Drive near Hidalgo Street that intersection is across from the Lake Don Pedro Elementary School near Highway 132. Cal Fire reports the fire is 20 acres in size and the flame’s are moving at a moderate rate of spread. Some structures are threatened at this time, but Mariposa Sheriff’s Office reports there are no evacuations.