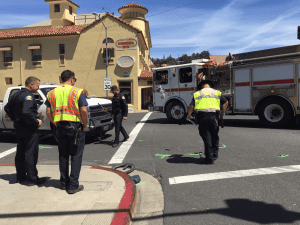 Sonora, CA – Surveillance video recently released to investigators turned out to be the key in clearly showing who was at fault as a Tuolumne County Sheriff’s Office Community Services Unit truck struck a boy on a bike at a busy downtown Sonora intersection.

Last month Acting Sonora Police Chief Turu VanderWiel told Clarke Broadcasting that investigators were waiting on video from a nearby business to be sent so it could be reviewed, as reported here. Now that police have had a chance to watch the video, he says it clears 51-year-old Dave Archibald, who was driving a sheriff’s issued 2013 Chevy truck, of any wrong doing. As VanderWiel describes, “It showed that the pickup had stopped at the intersection and began forward motion into the crosswalk. The bicyclist traveled northbound into the crosswalk without stopping.” He says from that, “It was determined that the bicyclist failed to yield to the pickup, which had already entered the crosswalk after stopping to make a right turn.”

The accident happened on the morning of June 5 at the intersection of Stockton Road and South Washington Street. As reported here, a 10-year-old boy, riding his BMX style bike, was struck and pinned under the pickup while crossing the road.  He suffered damage to his left foot. VanderWiel cautions the public that although pedestrians generally have the right-of-way, they must also abide by the rules of the road, indicating, “So, a pedestrian should not suddenly leave a curb or sideway and cross into the path of a vehicle that is so close to be an immediate hazard.”

When Clarke Broadcasting requested a copy of the video, VanderWiel replied, “We can’t release the video due to third party interest, which prevent us from releasing it.” He adds, “I wouldn’t want to release it, it’s kind of graphic on the victim. I didn’t like watching it even though I did know that thankfully the child’s doing well. It could have been so much worse and watching the video really showed how bad it could have been.”