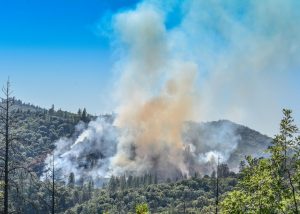 Tuolumne County, CA – Firefighters remain on the scene of the Grant fire burning in an isolated area of the Stanislaus National Forest, north of Columbia.

The fire’s size remains at nearly 18 acres but containment has grown 15 percent from 60 to 75. Forest spokesperson Diana Fredlund notes, “We still have four crews and two engines working the fire. There mopping up. It [the fire] is still surrounded by clear ground and the hoses. Crews are just slowly making sure that there are no hotspots, no flames and no smoke. They are containing it a little more each day.”

As reported here, the flames broke out on Tuesday along Italian Bar Road and Forest Road 3N47 in the Jupiter area. The forward rate of spread was stopped on Wednesday. No structures have been threatened.

A special thanks to our community news partner Darin McKinney for sending in the photo.