Update: Vegetation Fire On The Forest 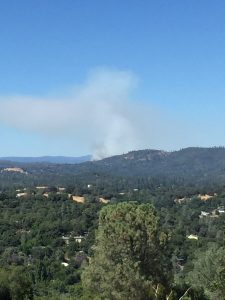 Update at 6:35 p.m.: Firefighters continue to battle the Grant Fire. It started just before 3 p.m. in vegetation along Italian Bar Road near 3N47 in the Jupiter area, north of Columbia. Forest Service spokesperson Diana Fredland reports the fire is eight acres and 25% contained. She updates, “They [fire command] don’t expect any big changes. They do think it is going to take another day to mop it up and fully put it out. It’s not getting any bigger. They feel confident that they have it under control and its going to just take them a little bit longer to actually put it all the way out.”

The Cal Fire Tuolumne-Calaveras Unit has been assisting in battling the blaze. No structures are threatened.

Update at 4:35 p.m.: Ground and air resources continue to battle a vegetation fire on the Stanislaus National Forest and have named it the Grant Fire.  The flames broke out on Italian Bar Road and Forest Road 3N47 in the Jupiter area, north of Columbia. Forest Service spokesperson Diana Fredland updates the acreage has decreased from about 12 acres, “Right now we are looking at about a seven acre fire. We have two dozers and six engines on scene and four tankers and a helicopter overhead. We are making progress.”

Update at 4:05 p.m.: Forest Service spokesperson Diana Fredland relays the latest information, “The fire is now 10 to 12 acres and crews are getting a handle on the flames. The vegetation fire broke out on Italian Bar Road near the Forest Road 3N47. Currently, there are four tankers and one helicopter in the air.”

Update at 3:45 p.m.: Stanislaus National Forest officials are reporting the fire is 7 to 10 acres north of Columbia in the Jupiter area with two tankers assisting from the air.

Original post at 3:14 p.m.: Stanislaus National Forest, CA —  Cal Fire crews are heading to assist with a vegetation fire on the Stanislaus National Forest. Cal Fire reports the flames broke out in the Grant Ridge area off of Italian Bar Road. Three engines, two hand crews and a strike team have been called to the scene. There is no word on the fire’s size or the flame’s rate of spread or whether any structures are threatened.  We will bring you more details as soon as they come into the newsroom.