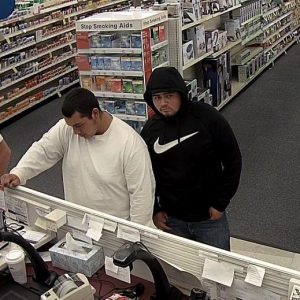 Angels Camp, CA — Two alleged thieves who grabbed drugs from what might be considered a secure area behind a pharmacy counter in broad daylight and then bolted remain at large, although their images were captured by security cameras.

According to Angels Camp Police, Monday afternoon shortly before 2 o’clock, officers were dispatched to the CVS Pharmacy following the theft, which turned out to be of liquid codeine. Store employees reported that suspects, both males, appeared to be either white or Hispanic and in their twenties. Prior to making the grab, the two loitered in the store for about 20 minutes until one suddenly vaulted the pharmacy wall to seize three bottles of the drug that were on the counter.

Both subsequently fled through an emergency exit. Three photos of the suspects obtained from store video surveillance can be viewed by clicking the slideshow link in the image box. Anyone who might recognize them or have information about the incident is requested to call the Angels Camp Police Department at 209 736-2567.