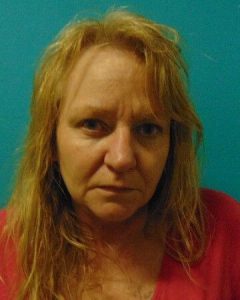 Sonora, CA — A Sonora grandma that already faces drug charges stemming from a recent arrest where her grandson fled the scene is in trouble with the law again — this time for harboring the juvenile.

Tuolumne County Sheriff’s Deputies conducted a check of 53-year-old Grandmother Thoris Donovan’s home located on Gunsight Road on Wednesday night. Sgt. Andrea Benson reports that deputies spotted her juvenile grandson in the front window of the home. Due to his age his name is not being released. He is wanted on a felony juvenile probation warrant related to his Grandmothers arrest in March for a drug bust at a mobile home at 22808 Four Wheel Drive Road off Quail Mine and Big Hill roads in Sonora. During that incident the juvenile took off on foot when a SWAT team raided the trailer.

Donovan was arrested for charges of accessory and committing a felony while out on bail. Her grandson was also taken into custody.