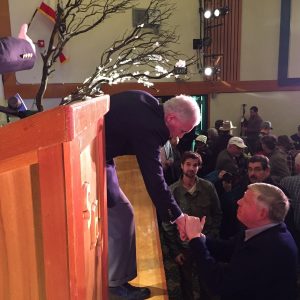 Sonora, CA — Congressman Tom McClintock weighs in the on the firing of former FBI Director James Comey and whether an independent prosecutor is needed regarding the Russian interference in the nations presidential elections.

McClintock cited Comey’s “gross misconduct” as a key reason for his ousting and the “highly politicized” circumstances surrounding the Russia inquiry as a need for an independent prosecutor. However he made sure to include a few political jabs while making his points that can be read in his entire statement below:

“I strongly support President Trump’s decision to fire James Comey for gross misconduct during his tenure, and only wish he had done so on January 20th. Because of the highly politicized circumstances involving the Russian inquiry, I think an independent prosecutor would be advisable to place the inquiry above reproach.  I believe it is equally important to appoint an independent prosecutor to purse the investigations that were swept under the rug during the Obama administration, including the use of the IRS to intimidate Tea Party members, the Clinton email scandal and how much top secret intelligence was lost to our enemies, and the unfolding scandal involving use of the NSA to spy on political opponents.”