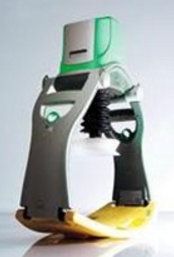 Mi-Wuk, CA – The Mi-Wuk Sugar Pine Fire Protection District has activated the Lucas II – a machine the Chief says will save lives.

As earlier reported here, a Sonora Area Foundation grant paid 80 percent of the nearly $15,000 price tag for the equipment with the district’s auxiliary picking up the rest of the tab. It is the only fire district in the county with an engine outfitted with Lucas II, which is a cardiopulmonary resuscitation or CPR compression system.

District Fire Chief Larry Crabtree explains its benefits, “The machine doesn’t get tired. The advantage to the Lucas II is because it’s accurate. It does more efficient compressions so the firefighter doesn’t get tired. It takes just a few seconds to get the machine on to the patient and then the rescuer simply has to do the breathing portion of CPR while the machine does the compression part. So, it turns the one rescuer instantly into a two rescuer CPR, which is much more efficient.”

Chief Crabtree notes that with the district’s aging population this equipment is a necessary tool, although it has not been put to the test yet. “It will save a life,” stresses Crabtree. “So, far we haven’t saved anybody’s life yet, but that day is coming. The studies show that the use of a machine like this increases the chance of survival substantially and all it takes is one person. If we save the life of one person then it’s paid for itself.”