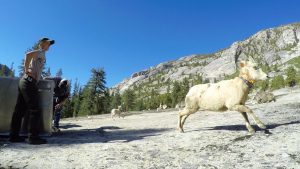 The heavy snowfall this winter has made life extra challenging for the Sierra Nevada bighorn sheep.

An official with the California Department of Fish and Wildlife estimates that around 100 of the combined 600 bighorn sheep along the Sierra Nevada have likely perished due to the harsh winter. The animals often hit their coiled horns into rock cliffs.

“They’ve triggered some avalanches,” Jason Holley, a wildlife biologist for the CDFW, told the Associated Press, “Others get caught in areas with no natural food.”

We reported in 2015 that there has been an organized effort in Yosemite National Park to boost the population of the bighorn sheep. The decline over recent months is one of the negative impacts of what has been a record breaking weather year in many areas of the Sierra Nevada.

The California Department of Water Resources conducted its final manual Sierra Nevada snowpack survey of the season today at the Phillips Station in the Lake Tahoe area. Officials found 190-percent of average snowpack for the date.