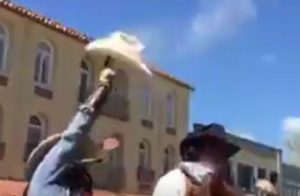 Sonora, CA — With guns blazing, Coyote Sam’s Gang brought traffic to a halt on Washington Street in Sonora and tried, once again, to stop this year’s Mother Lode Round up.

The gang was successful in disrupting a sponsors’ luncheon but found the Sheriff’s Posse hot on their heels. The Round-up Queen Contestants joined in the mock gunfight by squirting water guns at the outlaws in an attempt to get them to head out of town. However, the sly Coyote Sam was able to get his hands on a valuable horse bridle that he snatched out of the hands of this year’s Grand Marshal John Egger.  Sheriff’s Posse officials indicate that the bridle is a posse memento, which was originally owned by 1958 Grand Marshal Eddie Webb and used by last year’s Grand Marshal Vern Gerdau. This year it was entrusted to Egger to use to kick off the Round up. Without it, the gang may achieve its goal to stop the tradition unless the public is able to find a map Coyote Sam hid with an “X” marking the spot to where the bridle can be found.

The Mother Lode Roundup is held every year on Mother’s Day weekend, with this being its 60th year, running May 13th and 14th.