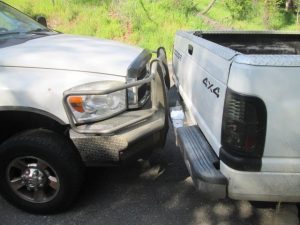 Jamestown, CA — A Sonora man’s road rage escalated into a fight after he rammed his truck into another pickup twice – but it was who was in the man’s truck that was really shocking.

The incident happened Monday afternoon when Tuolumne County Sheriff’s Deputies were called to the scene of a crash resulting in a physical fight on Rawhide Road.  After questioning the two men, deputies determined that 37-year-old Timothy Nielsen had become enraged with 22 year old Zachary Clark for tailgating and passing his pickup so sped up next to Clark’s truck and slammed into the driver side door.  As Clark pulled over, Neilsen then rear ended him and both jumped out of their pickups and began fighting, according to sheriff’s officials. Sgt. Andrea Benson reveals who was discovered in Neilsen’s truck that was so disturbing, “Deputies learned that he had his one-year-old daughter in the back seat of his truck. The little girl was thankfully uninjured and Deputies stayed with the little girl and made sure she was in good spirits as they waited for her mom to pick her up.”

Neilsen was taken into custody for assault with a deadly weapon and endangering the health of a child. Both men suffered minor injuries in the incident.