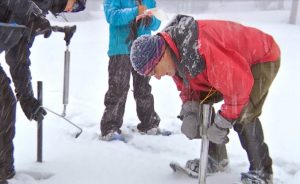 Sonora, CA – Trucking through about eight feet of snow, state water officials were all smiles while taking the March manual survey as Mother Nature comes through this winter.

Department of Water Resources took the manual measurements Thursday at Phillips Station near Lake Tahoe. The readings showed the snowpack’s water content at 183 percent of normal. Overall, electronic monitors show the Sierra measures at 164 percent. DWR spokesperson Doug Carlson reacts, “I think we can all be happy that this snow is up there. We’ve had significant rain fall throughout the state. Now we have to be concerned about taking care to be vigilant about what happens to all that water as it comes down from the snow melt and capture a lot of it. So then be prepared for any possible flooding that could occur.”

Carlson is referring to flooding concerns as this is the most dense springtime snowpack since 2011 — a year followed by five years of harsh drought. The state’s Chief Snow Surveyor, Frank Gehrke, who conducted the snowpack warns, “Flooding is possible if another round of stormy weather returns, causing the snow to melt quickly.”

Gehrke boasts, “This is an extremely good year from the snowpack standpoint. It ranks in the upper quarter of historic snowpacks and is providing great reservoir recovery.”

In a stark contrast, in March of 2015, Governor Jerry Brown attended the snowpack survey and found virtually no snow on the ground as shown in the image box of that story by clicking here.