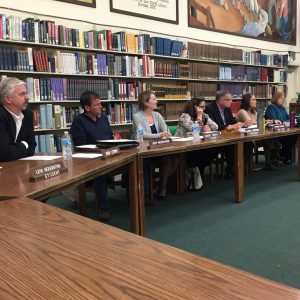 Emotions ran high with nearly 20 crowd members voicing their concerns. President of the California Schools Employee Association Danny Hinkel blasted the board for how employees learned of their possible layoffs, “Reading an attachment for a board agenda that was made public simultaneously…is a terrible way to find out that your position is being proposed for a cut. The process that was used this week was unprofessional and lacks dignity for your team of staff members.” A mistake Superintendent Pat Chabot admitted after the meeting to Clarke Broadcasting was “unfortunate.”

Other school employees’ voices quivered while addressing the board. Some facing cuts like Photography Teacher Dirk Travis even teared up when telling the board how he closed up his successful photography business to take the teaching job at Sonora High and criticized the board for putting in a pool the school could not afford. (Click here for more of Travis’ comments.) Ag Teacher Stacy Ingalls questioned the plan for partial cuts to pay and programs, “If you’re going to cut the program, cut the program…I financially cannot make it on sixty percent.” A sentiment echoed by the Treasurer of the Teachers/Counselor Federation Dina Pinocchio who also called for cutting entire programs and accused the trustees of making unfair cuts, “We want it made known that no cuts were proposed to the district office, which has added staff during the past six years of fiscal mismanagement. We ask that you make the hard decisions that you are paid to make. We ask that you look us in the eye after making them. We ask that you make equal cuts to your own office as well. We ask most of all for the kindness we deserve [clapping erupts}.” (Click here to view more of Pinocchio’s comments.)

Superintendent Chabot counters that one management position is on the chopping block, adding, “That’s what they [staff] believe, but I see it differently. All of the management is taking a reduction but not all of the teachers are being released.” (Click here to view Chabot addressing the crowd.)

Trustee Rob Lyons noted that none of the options facing the board are popular, suggesting, “I still think a situation that could save a lot of these positions is the negotiations going on with the unions. If they are in agreement with across the board pay cuts, we might have a whole lot less people getting laid off.” (Click here to view more of Lyon’s response.)

Some employees took issue with the fact that the district is waiting to see what classes students sign up for to ultimately determine where cuts will be made. They argue it pits teacher against teacher. A charge Trustee Jeannie Smith denied. With her voice cracking, she apologized for the cuts, stating, “It has been a perfect storm of decreased enrollment, things that we didn’t anticipate and not making some of the tough decisions when we should have made them and now we need to.” (Click here for more of Smith’s response.)

In the end, the board approved all seven of the motions that pave the way for the reductions over the next three years, which are further detailed here in an earlier article. Superintendent Chabot adds that fifteen layoffs is the worse case scenario and he is hoping to trim that number down before the actual cuts are made.