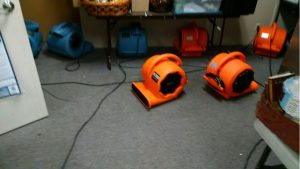 Fans being used to dry out the flooded store

Arnold, CA – The Calaveras Humane Society Thrift store in Arnold has been shut down since Wednesday as it tries to dry out from Tuesday’s down pour.
Store Manager Teri Aspesi is now fearful of what this weekend’s wicked weather will bring, nervously stating, “I’m afraid because we just started cleaning up.  To hear that it’s expected to be so severe; it’s like, ‘Oh my God! Is it going to do this again?’ I’ve got people that need to come back to work and cats that need to be adopted.”

On Wednesday when Aspesi opened the store she found it flooded thanks to a clogged drain pipe outside the back of the building. “The bathroom had a good inch high in water. Our backroom was just drenched in water. The rugs were just soaking and the water went all the way out to the main part of the store. It’s just terrible.”

The thrift store is located in the Meadowmont Shopping Center off Highway 4. It received the brunt of the damage and was the only store forced to shut down as a result of the drain blockage, according to Aspesi. Although she says that neighboring businesses did get some minor damage. Aspesi says this new round of wet weather puts the cleanup on hold, “We can’t make a plan or do anything until we know the extent of the damage. If it’s in the sheetrock, if any of that needs to be replaced? Also, whether the carpets going to be okay, does it need to come up and so on and so forth?”

The goal for right now is to reopen the store by Thursday, but Aspesi admits that may be optimistic.